When easyStorage first started, and the franchise areas were being calculated (each has a minimum number of households to care for), it was almost inevitable that inevitable that ‘BBC’ would stick for the Bristol, Bath and Cheltenham area. They also offer self-storage in Gloucester, Weston-Super-Mare, and everywhere in between, but let’s not stand in the way of a great title! 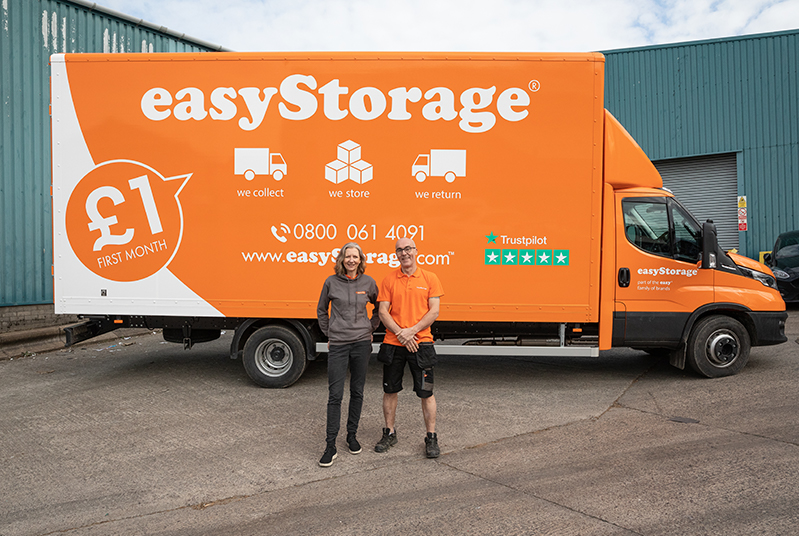 When easyStorage first started, and the franchise areas were being calculated (each has a minimum number of households to care for), it was almost inevitable that inevitable that ‘BBC’ would stick for the Bristol, Bath and Cheltenham area. They also offer self-storage in Gloucester, Weston-Super-Mare, and everywhere in between, but let’s not stand in the way of a great title!

Roll the clock forward, and Fiona and Russell Cowan have taken on the ‘BBC’ area (official launch date of March 18, 2021).

They already own a successful property franchise and so were already well aware of how franchising works, so when Alex and Emma Glass, Thames Valley franchisees recommended easyStorage to them, they took a closer look.

With COVID getting in the way, they were eventually able to attend a ‘Discovery Day’, where they warmed to Nick (Marketing Director) and his team, and liked that the ‘easy brand’ says something to customers. Not only is easy a known brand, but the name implies that there will be a decent service at a great price, with no unneeded ‘bells and whistles’. They later met CEO Tim. And the rest, as they say, is history.

From Bath themselves, they have a rescue dog, Lucy, who already has an easyOrange harness.

They love the area, which is hugely varied. From the regal grandeur of property in central Bath and Cheltenham to the University of Bath’s student ‘digs’;  from Bristol’s huge industrial shipbuilding businesses to amazing festivals; from GCHQ and cyberdefence in Cheltenham to one of the UK’s most famous horse racing events;, from the guest houses of Weston-Super-Mare to a helicopter museum; there is something for everyone in the area, which also boasts some of the most stunning countryside in England. And that means that the easyStorage BBC team are available to help with all kinds of different storage needs, from temporary student storage to clearing out homes for summer rentals.

And customers across the somerset region will have huge smiles on their faces when they realise that easyStorage not only collect and return people’s belongings, they do it at around half the price of traditional self storage. They can even help pack.

And we’re sure they’ll do it with style! If Irene Kapetanaki is the only one of our team to have held an Oscar, the ‘BBC’ nickname is not the only thespian link for the Bristol, Bath and Cheltenham self-storage facility. Russell used to be a prop master in the film industry. This, of course, will serve him well as he’s used to getting the right thing into the right place at the right time, to say nothing of meeting the needs of the most demanding of customers. (He’s also had handyman businesses in London and Bath.)

Fiona is the quiet force behind him. Whilst Russell loves the thrill and what she describes as ‘risk to life and limb’ of mountain biking, she keeps her feet firmly on the ground. Or should I say ‘bottom to the water’? She’s a keen kayaker come the summer months and suitable conditions on the water.

Both are clearly determined to succeed, so I can’t help but feel that easyStorage ‘BBC’ is clearly on the ladder to success.

Oh, and the tradition of naming the easyVan after the first customer? Fiona says their breaking with tradition. Theirs is called BBC1, with BBC2 to follow soon. See what I mean?

If you’d like a no obligation quote for storage in Bristol Bath or Cheltenham, you can do this online here: https://book.easystorage.com/, or call on