A Quarterly Look at our Trustpilot Reviews

‍At easyStorage we have a lot of fun, but we take our work seriously. Here's our 'warts and all' review of the last quarter's Trustpilot reviews - 4.7 out of 5 and rising! 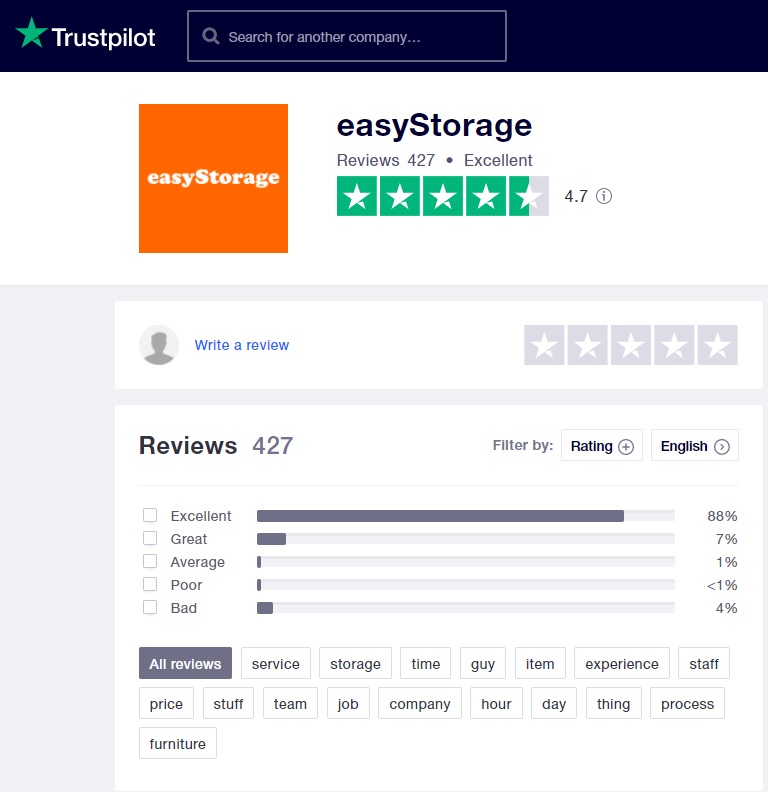 At easyStorage we have a lot of fun, but we take our work seriously. And we’re committed not only to transparency but also to constant improvement. We pay attention to what our customers are saying about us, so, once a quarter, we’ll aim to review what’s been said and round it up for you on this blog.

The most recent rating is from verified user, Robert. Robert gave us 5 out of 5 – a great start to our ‘review of reviews’:

Excellent service at every point

Excellent service at every point. Great value for money too. Brilliant that they come to you to collect.

Here’s one we are SO proud of, by Kristian, very typicalof other reviews:

(I left the link in so you can see we’re not making it up!)

We had expected price to be one of the most mentioned things in reviews, but far and away it was the qualities of our teams that won us these reviews: friendly, helpful and polite/courteous.

It seems they were punctual, professional, efficient and organised. It was great to also hear the back-office staff mentioned for their politeness, efficiency and helpfulness.

We’ve noted below the easyStorage people who were personally named as outstanding three times or more in reviews as a special thank you to them.

Whilst our people were definitely the thing that most reviewers raved about, our pricing came in a close second.

Although there were three anonymous one-star reviews, which gave no information about where or when they’d booked, generally the transparency in pricing was appreciated.

It was mentioned regularly that our teams worked hard and fast to keep people’s loading costs to a minimum. More than one reviewer mentioned that they had booked too much space, because the teams packed so well. The extra units were returned and ongoing storage costs reduced accordingly, with no fuss.

One person suggested that the service was slow and expensive. This runs so counter to the rest of the reviews that we are currently, of course, investigating to see wha thappened and that we are genuinely the company who moved their things into storage.

There was also a complaint that some goods hadn’t been in the returned pod. The team was really concerned and looked into it, and it transpired that the goods had been returned mid-storage. That’s where our organised admin and record keeping really pays off, and it was great to be able to remind the customer of this.(We all forget things sometimes.)

We believe it’s transparent: you can even get an online quote (with no commitment) and book at any time, day or night: https://book.easystorage.com/

In one review, someone mentioned that because they went over the hour, another hour was charged. The reviewer still gave a great rating, but her suggestion for loading pricing is being looked into.

Another 3 out of 5 review mentioned that the team weren’t as quick as wanted, which flies in the face of what most reviews say. Indeed, the speed was mentioned by many reviewers as one of the reasons they gave a five star review. But we take these things seriously, and by the time I took a look, it was being investigated.

Overall, speed was one of the things that our customers valued.

As we’re on the subject of time, many of the reviewers value that our people are punctual, prompt and on time.

We did have one complaint that one team hadn’t been able to find anywhere to park the loading van, and were made late trying to park up.  Noted!

Bookers can help, too. To be on the safe side, if you’re booking from somewhere with particularly difficult parking, especially when this is affected by time of day, it may be as well to mention it so that the teams can plan to work around it.

As an aside, he also gave office staff a chance for a little light-hearted banter along the lines of ‘my partner would love to do nothing!’ and ‘I would panic if my other half packed up unsupervised’.

Our teams were regularly mentioned for tacking stairs as high as five floors up, and even a spiral staircase!

The other thing mentioned was rain. This is the UK, so it comes with the territory. But well done to our teams for getting wet without wetting customers belongings.

When we come to customers, we come in our popular, striking 'easy orange' vans, made specially for us.

One review questioned that the pods sent in our van were wooden. Our management team were able to confirm that they are stored in climate-controlled units. (Wood allows air to circulate and things don’t stick in the way they do with some plastics.)

Although most mentions of space and price were that they had ordered more pods than needed and were able to obtain refunds and cut their storage costs, one person found that their things took up more space than anticipated. In fairness to our teams, they’re professionals at packing and can make the best of the space, but we do acknowledge that sometimes it’s difficult to know:

We were proud to have so many people mention that we 'do what we say on the can', and make storage easy, effortless and fuss free – some even mentioned tidy.

Our franchisees ensure that their staff know that often the reasons for storage go way beyond four walls to keep things in.

Amongst the reasons mentioned in our reviews were:

One reviewer summed up moving: they were tired, anxious and worried. It was therefore rewarding to hear our teams described as caring and thoughtful, and the service as hassle free, easy and effortless.

We learned a big lesson when we took a booking for a precious piano. Our team quickly realised that this was a specialist job and employed a specialist piano mover at their own cost. There was an issue with pod sizes, and the customer, sadly, remained unhappy.

And when an oddly sized door made removal a little difficult, a painted wall was scratched. Our team, of course, made good - and were rewarded with a 5 star review. (Thank you)

Why mention these here? Because our teams are human and do their very best, but sometimes things inevitably go wrong.They did their best, but we’re all human: we stick our hands up if we can’t do something and the whole team learns.

The other side of the unusual requests coin was a lady in Italy who couldn’t get home to the UK to pack up and store her belongings. Let in by the landlord, the team carefully packedall of her belongings and moved them into storage. She was delighted.

In another review, a lady had a puzzle folder. She forgot to warn that some of the puzzles weren’t completed, and some pieces inevitably fell out when it was picked up. Our eagle-eyed team spotted what was happening and retrieved the pieces, to the delight of the customer.

The roll of honour

We think our teams 'rock', and there were over 30 people personally named in reviews. Naming them all here would be madness (and boring for the reader!), but people whose name came up three times or more include Sonia, Aarti, Tariq and Lee. We think that deserves special mention.

A number of people only gave us 4 out of 5 reviews because they hadn’t yet experienced the other end of the service – goods returned to them.

In future round ups we look forward to hearing what they thought and are keen to keep those five star reviews rolling in.

We hope you’ll return to read about it as well.

All most recent reviews can be seen here: https://uk.trustpilot.com/review/easystorage.com