Meet the pair determined to bring better service and better value to self-storage in the Hertfordshire area. The easyStorage model means that the vans come to customers, pick up their belongings and take them off for safe storage. easyStorage can even help customers pack. And all for about half the price of traditional self storage. 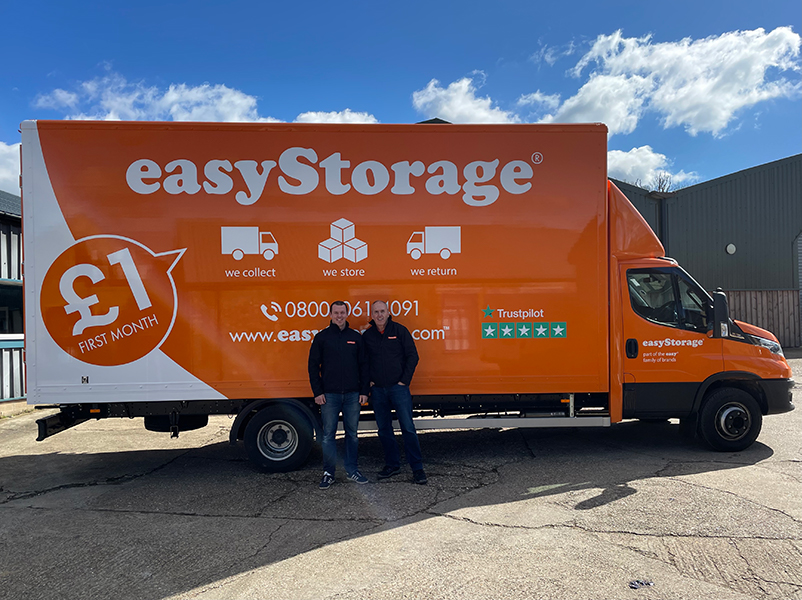 When Steven Gill’s son and daughter in law were moving, they hired a van, lugged their possessions around and had to struggle ups and downstairs in a storage unit with boxes.

Fast forward, and today the arrival of a big orange van means that Steven and son Richard plan to put an end to struggling with old fashioned storage units. The father and son team were waiting for the delivery of their bespoke easyVan to formally announce that they are now open for business as easyStorage Hertfordshire.

Although dad Steven will be driving the van to begin with, plans are for son Richard to eventually be in the driving seat, with Steve driving the back office and the marketing.

The pair is determined to bring better service and better value to self-storage in the Hertfordshire area.

The easyStorage model means that the vans come to customers, pick up their belongings and take them off for safe storage. easyStorage can even help customers pack. And all for about half the price of traditional self storage.

As easyStorage is a franchise-run, meaning that the father and son duo have joined a wider family of easyStorage franchisees. They know and like the franchise model, and already run a property management franchise, which is fabulously complementary to the easyStorage offering.

A friendly, straight/talking Yorkshire man, originally from Leeds, Steven admits to liking a bit of a gamble occasionally, although he recently went to Vegas and managed to resist gambling a penny. He claims to prefer skill-based gambling, like backing the odd horse, over pure luck.

Still, skill is clearly something that runs in the family. Son Richard Gill retired from playing semi-professional rugby just 18 months ago, in a career that saw him play Rugby Union for England as an Under 18, and since with the mighty Saracens, and latterly as a coach for local club Bishops Stortford.

And while we’re talking about winners, let’s give a passing mention to Richard’s mother Helen, who’s been married to Steven for just over forty years (ruby wedding anniversary). You have to be great at relationships to hold together for so long in today’s World, a fabulous skill for our franchisees to possess.

So having established that we have a winning self-storage team in the Hertford region, who’ve backed the right horse by joining us, with plenty of staying power and a gift for great relationships, there is just one more important thing left to establish.

We have an easyStorage tradition of naming our vans after the first customer they serve. Richard, Steven: what’s yours going to be called?